Investors are opening their minds and wallets to the possibilities of psychedelic-assisted therapies.

Three biopharmaceutical companies aiming to make psychedelic drugs to treat mental health disorders have gone public in recent months: Peter Thiel-backed Atai Life Sciences IPO’d in June and now has a market cap of $2.6 billion; MindMed went public in April and now has a market cap of more than $1 billion; and Compass Pathways IPO’d in November, with a current market cap of nearly $1.5 billion.https://3cfb1253ef196b699a9ad88dc8c2701b.safeframe.googlesyndication.com/safeframe/1-0-38/html/container.html?n=0

Together the three companies have more than nine psychedelic therapy drugs in their pipelines. And that’s not to mention the work being done by many more private biotech and telemedicine companies like Y Combinator-backed Gilgamesh Pharmaceuticals, as well as start-ups like Mindbloom, which is already treating patients with ketamine-assisted psychotherapy. (Ketamine is not a psychedelic but is considered a dissociative anesthetic that can lead to a distortion of sights, colors, sounds, self and environment).

All this means that tripping on mind-altering drugs like MDMA could become a regular part of therapy to treat conditions from depression to post-traumatic stress disorder, addiction, chronic pain and obsessive-compulsive disorder in the next two to five years.

Here’s what that could look like and what the research says.

How psychedelics work for therapy

Psychedelic drugs are substances that alter perception and mood and affect a number of cognitive processes. The classic psychedelics include MDMA aka “ecstasy” or “molly,” LSD, psilocybin or “mushrooms,” ayahuasca and ibogaine.

Used in conjunction with therapists, research has shown that psychedelics can help treat historically difficult-to-treat conditions by essentially “reshaping” the way “parts of the brain talk to each other,” says Jennifer Mitchell, a neuroscientist and professor in the departments of neurology, psychiatry and behavioral sciences at the University of California San Francisco.

Researchers provide therapeutic support in the treatment room at one of the study sites for MAPS-sponsored clinical trials of MDMA-assisted therapy for PTSD.Courtesy of MAPS.

“Psychedelics allow for processing in a way that enables subjects to let go of things that had previously plagued them,” she says.

As Mitchell explains it, when people are young, their brains go through critical periods of learning and development that then become closed off as they age. Researchers believe that psychedelics “open those closed critical periods for just a tiny window of time,” she says.

“When that critical period is open again, you want to make the most of it, and make that potential change as positive as possible,” she says.

With psilocybin, for instance, it is believed the drug boosts connectivity in the brain and increases “neuroplastic states,” which are the brain’s ability to reorganize and adapt, says Dr. Stephen Ross, associate professor of psychiatry at the NYU Grossman School of Medicine, who has been conducting clinical trials on psilocybin-assisted therapy for the past 16 years.

A recent Yale University study conducted on mice, for instance, found that a single dose of psilocybin led to an immediate increase in connections between neurons that lasted for a month afterwards.

When on psychedelics, “parts of the brain that don’t normally speak to each other start to communicate with each other, and it appears to reset brain patterns in some way,” he says.

What psychedelic therapy looks like: ‘It’s not Burning Man’

MDMA-assisted therapy could be approved by the FDA for medical use as early as 2023, while other psychedelics, notably psilocybin, are waiting in the wings for their turn to be evaluated for medical purposes.

If and when psychedelic-assisted therapy is FDA-approved, it will be far more complex and medicalized than just someone taking mushrooms recreationally in the woods.

“You don’t just get thrown into it,” Mitchell says. “It’s not Burning Man or something. It’s very thoughtful.”

First, patients will have to be carefully screened to be eligible.

“It’s not for everybody,” says Dr. Corine de Boer, chief medical officer at Multidisciplinary Association for Psychedelics Studies, a nonprofit research and educational organization. For example, the treatment isn’t suitable for people who have a history of psychosis or cardiovascular issues. (And at the moment, psychedelics are not being studied on people with milder mental health conditions or people without clinically diagnosable conditions.)

For those who do qualify, psychedelic-assisted therapy sessions will be “a synergy between the participants, the therapists and the drugs,” de Boer says. 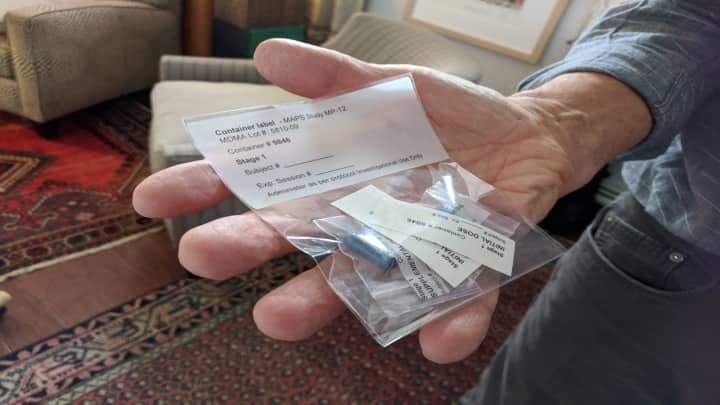 Research-grade capsules for use in MAPS-sponsored clinical trials of MDMA-assisted therapy for PTSD.Courtesy of MAPS.

Before any drugs are administered, clinicians meet the patient to talk about what might come up for them — for example, a traumatic incident or painful memories from childhood, or for a terminally ill patient, they may review how the disease has affected their lives.

The sessions, during which the patient takes psychedelic drugs, can be pretty labor intensive and long (about eight hours), Mitchell says. A single dose of MDMA acts for six hours and a half-dose is given about 90 minutes into the session.

To ensure that the patients have a comfortable setting in which to trip, providers set up a space that resembles a living room or bedroom and give the patients eye shades and a playlist with soothing music before taking the drug. Patients are invited to “go inward” and think about the topics that they discussed in the preparatory sessions.

“Whatever comes up for them is whatever the medicine decides, based on their own history and [brain] circuitry,” Mitchell says.

Patients might talk about the topics that come up, and the therapists are there to help them accept and listen to whatever ideas come to the surface, rather than prompt them with questions. “As you could imagine, there’s a lot of emotions,” Mitchell says.

Patients are conscious and can comfortably eat, drink and use the bathroom, though are escorted by two staff members when they stand or walk, Mitchell explains.

The following day there will be an “integration session,” in which the therapists talk to the patient to help them make sense of the experience. The patient might circle back to the reasons why they pursued the treatments in the first place and discuss what they felt or saw during the experience, for example.

Mitchell says there’s an important transformation that takes place when people take psychedelics in this clinical setting. “It’s amazing how much lighter and freer people appear to be following the even the first session,” she says.

Indeed, in a recent MDMA study, depression was offset or significantly attenuated after three doses that were each administered about a month apart.

The expectation is that these treatments will eventually be covered by health insurance. Getting insurance to cover treatment is also contingent upon the compounds getting rescheduled from their current classification as Schedule I drugs under the Controlled Substances Act. (Experts anticipate MDMA could be rescheduled in the next two years.)

Naturally, there are risks to the treatment. People who have psychotic disorders as well as those who have hypertension are not recommended for psychedelic-assisted therapy. Outside of a clinical trial, many psychedelics, such as psilocybin and MDMA, are classified as Schedule I drugs under the Controlled Substances Act.

But “in the next three to five years, psychiatry is going to be profoundly altered” by psychedelic-assisted therapy, says Ross.